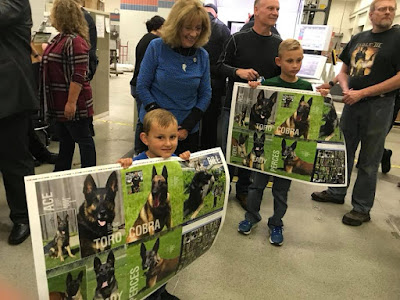 In an upcoming calendar, 25 central Wisconsin K9 teams will be featured in support of each K9 team’s program. Collectively, the teams will represent six counties throughout the region including Clark, Lincoln, Marathon, Portage, Taylor, and Wood.

On Thursday, September 7th, the printing of the calendar officially launched at Spectra Print. The creative team along with available participating K9 teams were on hand to experience the "Start the Presses!" moment.

The calendar, which has been been voluntarily coordinated and covers 2019 to March 2020, has been a heartfelt undertaking over many months. Starting spring of this year, Amy Zondlo donated photography of each participating team, with then later handing the images over to Robin Patrick of Moxie Creative Studio who donated graphic design of the calendar. 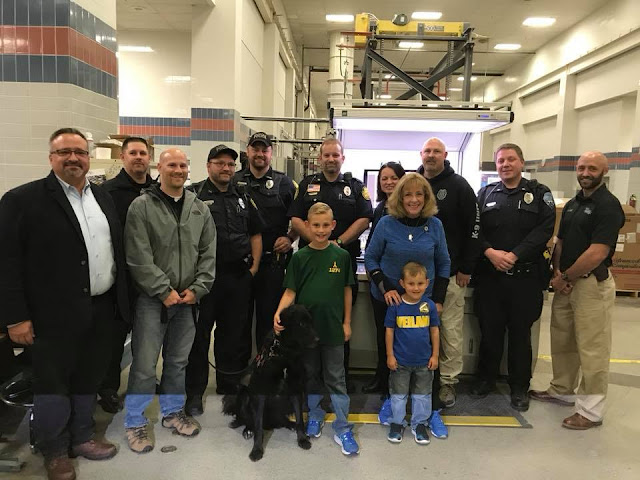 “Whenever possible, I captured team images in the light of the relationship overall – the strong bond between K9 and handler, not only the working side of what may otherwise initially come to mind. I learned about the complexity of this bond, yet it was quite basic in the end – to defend and protect one another while doing good in the community,” shares Zondlo. “I experienced several emotions while photographing the teams including initial intimidation based on sheer size and strength of the dog, to amazement in the K9’s agility and obedience, to understanding how a K9 team can help provide comfort and trust, to laughter from the K9 simply wanting to be an ordinary dog playing with its beloved toy – the tennis ball in this instance,” she concludes. 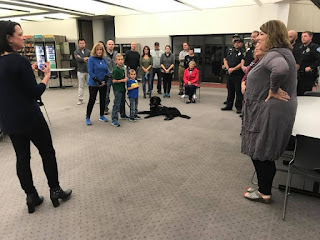 An anonymous party donated enough paper to print 700 calendars to be shared across participating teams, with Stevens Point-based Spectra Print also graciously donating the actual printing of the calendar. Wire binding, the spiral binding commonly found with calendars, has also been donated.


Not only will the calendar feature current K9 teams throughout the region, it’ll share educational elements allowing the community to learn more about the different types of K9s as well as why the otherwise common tennis ball is so adored by these dogs. K9s that have served but no longer here will also be remembered.

Each participating K9 team will receive a supply of calendars to use as a fundraiser in support of its agency’s K9 team(s). Calendars will be available, on a suggested donation basis, at each agency so please contact one of the following for more information:

Posted by Spectra Print at 8:39 AM 3 comments 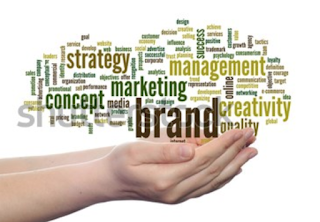 Before you start your brochure copy outline or choosing the photographs and color scheme - stop. It may surprise you to hear that an effective, well-designed promotional piece does not begin with the content. Soput down the pen, turn off the laptop and consider to the following questions.

What is the goal of the brochure? While this may seem obvious to you, a brochure is not always about “a sale.” Is your brochure going to be used to introduce your company? Is it going to be used as a tool to educate or as a followup to a presentation? Establishing a clear goal in the beginning will help smooth out the creation process.

Who is your audience? Is your target audience prospective customers, current customers or the general public? Is there a particular section of the market that you would like to reach? When your brochure reaches the hands of the customer/consumer will they have previous experience with your company or product? Knowing your audience is an important process of your promotional literature design.

How will the brochure be distributed? Once it is printed and packed neatly into boxes, you need to figure out how to get that brochure into people’s hands. Will it be mailed or handed out an an event? Will it be included in a folder as part of a presentation? Will someone from your company’s sales department leave it behind as part of a meeting with a client or will it be placed in a rack or on a showroom table? The physical characteristics of the brochure will be determined by the answers to these questions.

What format is best to convey the information? There are so many options available. For instance, a brochure that will be mailed is going to have vastly different characteristics than one that is part of presentation. A mailed brochure could be designed as a self mailer or to fit into a standard envelope. The possibilities are almost limitless.

The best place to start is to contact our sales department. They would be happy to set up a meeting with Spectra Prints’ top notch designers and help you create a brochure that will not only achieve your goals but reach the right audience and showcase your company or product in the best possible light.